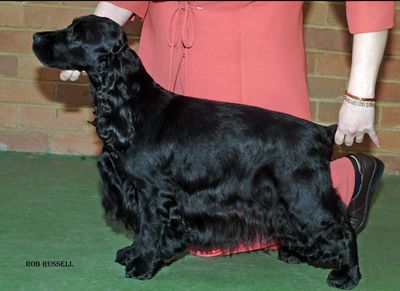 Kirsty has Best In Show and many Group wins to her credit, under Cocker and Gundog specialists. Kirsty has all the features of a typical English Cocker, sturdy, compact and the sweetest temperament. She truly has made a home at Britebay.

Winning Bitch Challenge & Opposite Sex to Runner Up in Show at CSS of NSW, Penny Lester (UK) {Quettadene} commented on her type & balance coupled with a good straight front excellent bone & well padded catlike feet. Her head was balanced with a nice foreface & lovely expression. She was well angulated both front & rear and moved soundly.

Some of her wins include Best Exhibit in Show at the 2002 Cocker Spaniel Club of Victoria Inc’s (CSCV) Championship Show; Judge Mrs Karleen Bennett. Also Kirsty won Runner Up in Group 3 at Canine Amenities in 2004 under Mr Roger Bridgford.

We would like to thank Elaine for sending us a delightful dog.