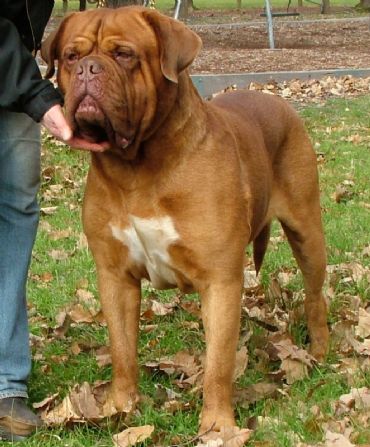 Adeaus is just hitting 5 years old, and like a good wine just gets better and better, beating much younger males in there prime and with Back to Back Best of Breed wins at Royal Melbourne show in 2008+2009+2010, he has proven to be one of Deauxrogues Big Guns, A`deaus son Cyris has followed down the same winning road as his Dad and Grand Dad the Great Argento with a massive win at Adelaide Royal 2009 and to top it off Cyris daughter at Adelaide Royal places Runner up Best of breed plus Puppy of Breed and Puppy of Breed at Melbourne Royal 2009.. Now thats what I call Consistency in lines.


Like most Argento pups, Adeaus has inherited his fathers superb colour and wonderful temperament.
He has a lovely trapezoid head, nice strong underjaw, strong rear end with excellent drive and very nice turn of stifle. This young fella has been excelling in the show ring, often beating our other dogues and dogues that are much older than himself, we are so proud of our "baby"
We recently had Adeaus hip and elbow scored and are thrilled with the score of 10 for hips and 0:0 elbows.