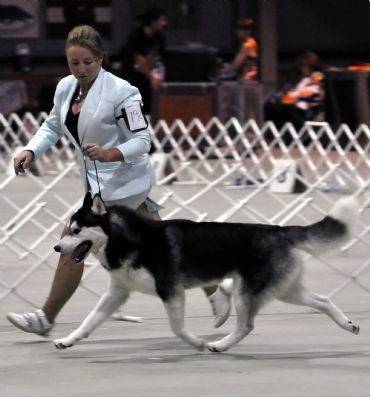 Odyssey is our up N coming star out of Aust Ch UtopiaLand Rhymed Verse (AI) - Rhythm and our home bred Best in Show winner , Aust/JKC Ch UtopiaLand Black Power - Oceanus. Odyssey is a handsome man with a mind of his own. He has sound coming & going with a fluid long stride movement.

Odyssey hits the show ring with great success! He is a Reserve in Show, multiple BEST IN GROUP (Group 1) and a consistent Best of Breed winner in QLD, NSW and VIC. Odyssey has also been doing well in his classes with winning a number of classes in group/show from baby class. One of his show highlights was a BABY PUPPY IN SHOW at the Siberian Husky Club of Victoria under an USA judge.