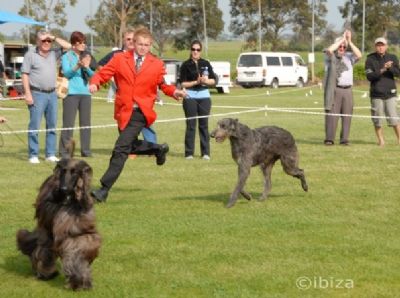 Indi joined us here at Bhealaich in 07. She found the show scene a little overwhelming as a youngster so was only shown occasionally. Two years later she matured into a very strong bitch and started to really enjoy her new experiences in the show ring. Indi took out Runner Up In Show at the 09 Deerhound Club of Vic Open Show. Indi has now proven her place in the showring by winning BEST OF BREED at the 2009 Adelaide Royal Show. Indi gained her CH title with Best Of Breed at the Hound Club Of Vic Specialty. She confirmed this with Best Of Breed next day at Sunbury. Indi was Deerhound of the Year in 2010 ( DCV ). In 2011 she gave us her first litter with Ch Mapleridge Monarch. In Decenber 2011 she returned to the show ring to take Ch & Runner up Best of Breed to her 6 mth old son ( Bhealaich On Your Bike ). In 2012 she was Ch & Runner up Best of breed at Canberra Royal & Bitch Ch at Sydney Royal. She is now in semi retirement, hopefully having her second litter in 2013.