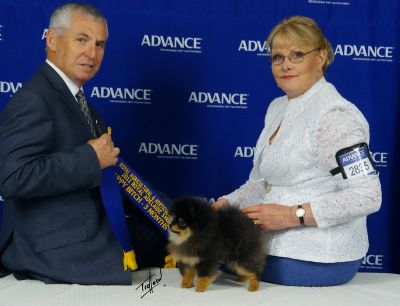 Eden has now retired from the show ring as an entire bitch, and has finished her maternal duties and has returned home to be greatly loved and possibly shown as a neuter.

Eden come to join us here at Borndownunda!

She is a little girl who has a big attitude both outside the ring and inside the ring. eden melts hearts, and turns heads where ever she goes, with her outgoing and larger than life personality.

At her first weekend of showing here in Adelaide, she had lots of people commenting on her compact confirmation, huge coat, small ears, and Black and Tan colour.

In her first 3 weeks of shows, Eden has been awarded:

At the 2013 Sydney Royal Easter Show, eden was awarded Reserve Challenge Bitch
All these were awarded to her while she was under two years of age.
Eden has also been awarded:
2 x Minor Puppy in Group
1 x Minor Puppy in SHOW
2 x Puppy in Group
8 x Intermediate in Group
5x RUNNER UP to BEST EXHIBIT IN GROUP
1x BEST INTERMEDIATE IN SHOW
1x Best OPPOSITE IN SHOW (Speciality Show)
2x Australian Bred IN SHOW
2x BEST EXHIBIT IN GROUP

This stunning little girl has commenced her show career with a BIG BANG!

Eden has become an Australian Champion, having been awarded both Challenge Certificates and Best of Breed Certificates under both International and Australian Judges. We thank these respected Judges for awarding her outstanding qualities.


The biggest thankyou firstly goes to Kim Haddon in Queensland for allowing this little girl to come and share her love with us and giving me the joy of showing her, and secondly to those Judges who have recognised her qualities.

We have high hopes for this little lady as she matures.

this little pocket rocket has now been desexed and will be shown when she grows some coat in the neuter class, where I'm sure she will have lots of fun.