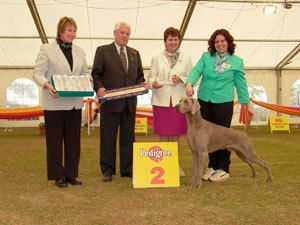 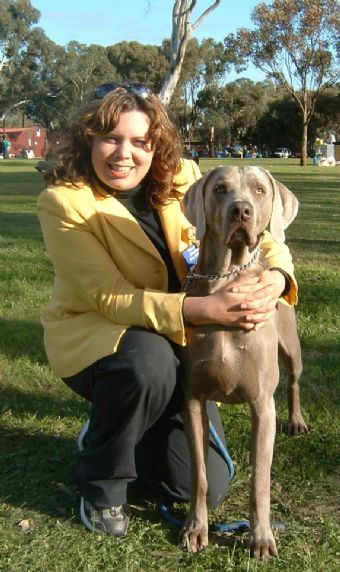 The 'Main' Man at Waldwiese ...... 'Vader' has
Developed from a tiny gray scrap of a baby into a
Strong, masculine representative of the breed.
He thinks he is the very best!
'Vader' is from the winning combination of Levi X
Rumour that has given us such wonderful stock from
The very best blood lines available.
Vader had a great start to his career,
Winning BEST OF BREED at the 2002 Melbourne
Royal at just 14 months of age.
This proved to be just the start to his exciting show Career.
He is a multiple Championship Best In Group winner,
Including the prestigious SACA Autumn Festival in
April 2003.
'Vader ' is a proven stud and his services are
Available to select bitches. His progeny are proving
Themselves in the show ring, Tracking, Retrieving
& OB. He is an exciting addition to the LH gene pool.
We commenced Tracking in 2003 and 'Vader'
Passed his Prelim, Track 1 and Track 2 in
Consecutive months, giving him his
TRACKING DOG Title.
The following weekend he wins BEST EXHIBIT IN
GROUP and then RUNNER UP BEST EXHIBIT IN SHOW.