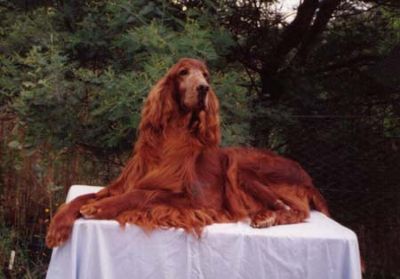 
'Montana' was sparingly shown but achieved at the highest level with three Royal Challenges a Melbourne Royal Group and back to back Speciality Best In Shows.As a sire 'Montana' equalled the record of his sire 'Ch Eireannmada Arizona' each with twenty one champions.

The tragic loss of 'Marigold' Charltons Marigold (Imp USA) prevented her true potential ever being realised and her only progeny from her one litter to Aust & NZ Ch Eireannmada Montana were therefore highly valued.

Wells Fargo Marigold and Montana's showed himself able to produce as his pedigree and heritage would have suggested siring multiple Royal Challenge winners and the wonderful producer Eireannmada Irish Whimsy.
Montana appears in many of todays winners pedigrees