Bred by :
A. Jellett
Owned by :
A.Jellett
Championship Points :
794 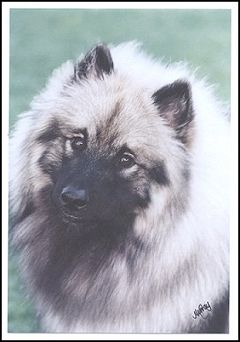 Titled at 10 months with a Best Exhibit in Group & Puppy in Show. (Until Llewellyn commenced his show career, Taison had won more awards than any other Keeshond ever before in WA.)

He was the 1st Keeshond to ever win Best Exhibit in Group 7 at the Perth Royal (1998) under breed specialist Mr J Travers (Ireland) and achieved many other "firsts" for the breed here.

The majority of his championship points were gained in the days when Best of Breed points were awarded only for male dogs defeated, not for all dogs & bitches defeated at breed level as is the case today - Taison was not far off his Grand Champion Title with 794 points but unfortunately due to other committments was not shown since early 2002.