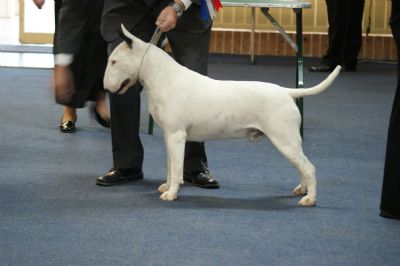 We feed and recommend NUTRO
and are proud to be NUTRO AMBASSADORS.

Being sparingly shown as a youngster Mikey gained his title with ease. At his first and only Bull Terrier Specialty Show so far, he came away as Reserve Challenge Dog and Junior In Show under renowned Bull Terrier man Mr W Fitzgerald MBE, where he gained his first points towards his ROM. At The Bull Terrier Bi-Annual Trophy Show the same weekend he won Best Junior Dog under Mr David Jones (UK) of Nevada Bull Terriers. Mikey has since been awarded his first Best In Group at the age of 15 months under Terrier Specialist Mrs M Marsh and Runner Up In Group at the 2007 Spring Fair!

Now maturing into a beautiful adult we look forward to an exciting future.