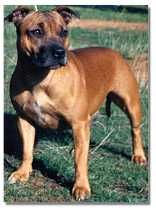 Prisy named after Miss Prissy the Hen and Prunela because she looked like a wrinkled up old prune when a baby . The outstanding soundness and qualities of the current Boldhart dogs can be attributed to Prisy. - Our pride & joy. She is the dam of 7 wonderful champions and many others that could have been titled if shown.

Prissy's greatest assets were her level topline and fantastic movement - both of which she still had until the day she went to God in January 2001.