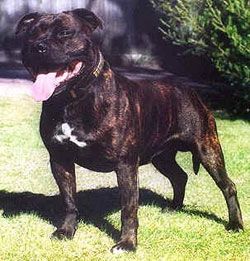 Swampy came into the world as an ugly duckling, with big drop ears that took until 4 months to come good, and he always seemed too clumsy for his big feet as a puppy. In fact when we sent a photo of him to his sire’s owner, the advice was loud and clear to get rid of him. He was always a bit of a gentle giant, and was as gentle as they come around the house, but still had that ability to respond to any challenge.

Last in his class of 5 exhibits at his first show, it wasn’t too long until the wins started and he gained his Aust Ch title 10 days after turning 12 months old. Soon after he went on his big Overseas Expedition, to New Zealand, kept a couple of the local girls “happy” and gained his NZ Ch title in just 9 shows, only being beaten once, by his own son.

On return to Australia, he saw the highlight of his career, Runner Up in Group at the 1994 Melbourne Royal Show. Soon after he became quite sick, with Viral Meningitis, and the best veterinary advice was that we would loose him at this very early age. However, given a chance, he pulled through with true Stafford grit, unfortunately to be left with secondary Epilepsy which only brought us closer to him as a very special dog. Since then, in his “borrowed time” he went on to gain his Companion Dog title at 4 years of age, Companion Dog Excellent at 5 years of age, both with reasonable ease, and finished with 9 passes at Open level.

In January 1998, following the announcement of the new Grand Champion title, Swampy won the 1 Challenge needed to earn this title, to finish the process of turning the ugly duckling into the magnificent Stafford and friend that he always was.

Unfortunately ill health took this magnificent friend from us at the age of 9 years when he suffered a stroke, no doubt a legacy of the Meningitis. We will always miss Swampy but are always thankful of the time he spent with us, albeit too short, but he achieved plenty in his short time on the planet.