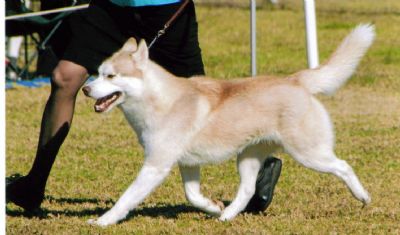 Earl was a dilute red & white, bi-eyed boy who was very affectionate and loving. He just wanted to please you. Earl had a strong front with correct movement and a lovely croup and tail set. Earl enjoyed much success on the show circuit, taking numerous BEST IN GROUPs and Classes in Group & Classes in Show.

Earl placed consistently at Specialities and Royals including 2nd in Intermediate Class at SYDNEY ROYAL, April 2009 and Best Puppy of Breed at TOOWOOMBA ROYAL, 2008.

Earl was an enthusiastic, 'happy-go lucky' boy. He had gorgeous movement - fluid and light on his toes with excellent reach and drive and a strong front. These attributes he bestowed upon his daughter, Aust CH Baykalskee Liberty Belle. Earl enjoyed his retirement with Sharon and her family where he was absolutely spoilt and rightly so.