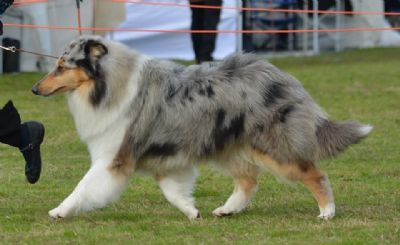 Yay Storm! The lovely blue girl has finished her Australian Champion title in fine fashion with
Best of Breed at the Rochester Ag Show 27 Feb2016 under Richard Stoate.

With only a few shows in the second half of 2015, Storm has a huge points haul, leaving her just short 6 points to finish her Australian Champion title.

Storm is an energetic girl, who is only just starting out in the show ring this year. So far it's all a bit strange, but she is improving with every outing. Her second All Breeds Show and Storm is awarded Bitch Challenge and Runner up Best of Breed.

2014 was a great training year for Storm's support crew with some fantastic wins along the way. Well done everyone. Only a handful of shows and halfway to her title.

2015 has not had a great start! After a disastrous visit to a groomer (Brooke was on holidays) to be only bathed and dried, Storm has had her coat hacked in places no collie should ever be cut! Due to this ridiculous behaviour by this groomer told NOT TO CUT ANYTHING, Storm will not be showable for most of this year. Such a waste of time for this lovely young lady.

2017 has had Storm off most of the year for Maternity duties. An amazing mum, raised 4 bundles of energy easily. We have kept her blue daughter, Tempest, Ellerran Parti Sensation. Storm has returned to the ring for 2 weekends in November.

A big thank you to Storms support crew in Victoria, handlers, groomer and Best Exhibit in Group handler Brooke Pilkington and parents Chris and David Aisbett.