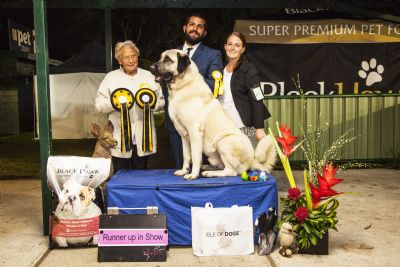 Jaff is a working Anatolian in the NSW Hunter Valley, protecting his sheep and small number of goats and chickens.

At 2 years of age Jaff left his farm for the fist time to attend his first Dog Show. Jaff was awarded Challenge Dog (Best Dog) at the ASD Club of NSW Inc. Championship Show in April 2015.

In Septemeber 2015 Jaffa was awarded BEST IN SHOW at the ASD Club of NSW Championship Show under Turkish Breeds Specialist and president of the Turkish Kennel Club, Dr Umit Ozkanal (Turkey), with a fantastic critic of his form for function.

A few days later Jaffa went on to win BEST IN GROUP under Dr Umit Ozkanal, then RUNNER UP TO BEST IN SHOW (All breeds) under Mrs M Lunde (Norway)!

Jaffa is proof that genuine working dogs, (not an over reactive, glorified suburban door bells) with correct working temperament can be both working dogs and show dogs. Jaffa is the REAL DEAL!

After his recent wins, Jaffa is now Australian Champion and will be back at work on the farm until the next big show.

Thank you to the judges who who awarded Jaffa so highly.