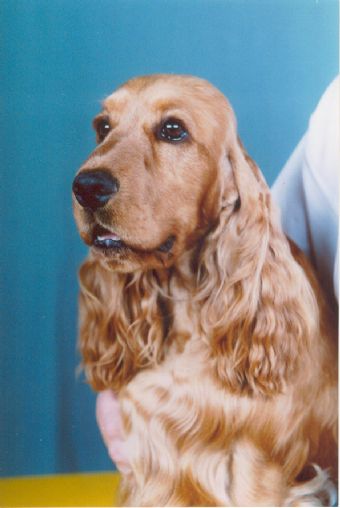 Charlie is the most lovable, happiest dog you could ever wish to own. He certainly makes an impact on those who meet him – as he always greets you with his tail wagging and a bottle or toy in his mouth! Charlie obtained his Australian Championship title very early in life, partly due to his carefree outgoing attitude which is still evident today. Charlie won many In Show awards and his children are doing and have done extremely well in the show ring. Charlie is infrequently shown nowadays and he is more content to be the “house” dog with Louise.

Named after the future king, he has all the qualities of a king, ‘blue blood’ pedigree, distinguished character and a regal bearing. He certainly is king at his home!

You can now see both Charlie & Louise on pet treats packaging for a leading Supermarket chain.

© - photo is under copyright;

At the moment Charlie's daughter, BRITEBAY BLACK MOON aka Phoebe to her friends - is making her Dad proud - even if she has inherited some of his idiosyncrasies!