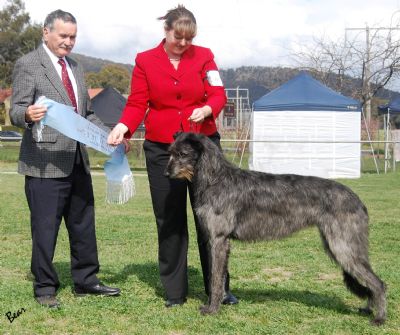 +++NEWS FLASH+++
Raven gains the final points for her GRAND CHAMPION TITLE with a BEST IN GROUP
at Cooma & District Kennel & Obedience Club on 29 November 2010 under Mr I Hinde - VIC!

Raven gained her AUSTRALIAN CHAMPION title at 12 months and two weeks of age.
She is also a Royal Challenge winner and Multi Class in Show winner.

In 2011 Raven was also awarded Bitch Challenge and Runner-up Best of Breed
at Canberra and Adelaide Royal Shows!

Raven had a very successful show career and produced one lovely bitch for us, Fyrth Three Libras "Hana" who lives with our friends Kirk and Tina.

Our thanks to all the judges that have recognised and awarded her quality!

Our biggest thanks to her breeder and 'Other Mother', Avril Stoffels, of Anduril Deerhounds,
for allowing Raven to join our family.

Our dogs are tested by a veterinary cardiologist for cardiac disease.