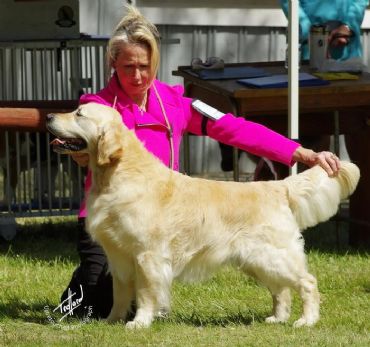 Mason completed his GRAND CHAMPIONSHIP title at just 3 years of age and at the 1st qualifying show available he became a SUPREME CHAMPION at 4 years of age. Constantly on the pegs, and consistently taking the GROUP, he is not only a super representative of the breed but a total gentleman.

Despite missing no less than 20 shows here in Tassie, due to my judging commitments away, Mason is still in the top 10 at both Breed and group level. He will be back in the ring soon - just waiting for his 'winter wardrobe'. In the meantime his position has been well filled by my young dog Webber.

He's a SPECIALTY BIS, MULTI AB Best In Show (X5), RUP BIS AB & GUNDOG winning dog. Mason attained his NZ Champ title with ease and collected a Best in Specialty Show win along the way. After only 6 months of showing back in Tasmania he is now the top winning GR here.

Mason wins back to back BEST IN SHOWS on 12th/13th March 2011 under Mrs L Norman & Mrs G Cook from Victoria. What a weekend; made even better by his daughters getting the BCC & Res BCC plus their classes in Group.

In 2010 Mason won BEST IN SHOW All Breeds under breed specialist Carolyn Ryan (Qld), then Runner Up Best in Show x under gundog specialists A OKeefe (NSW) Maureen Hanley (NSW) & Rex Lowe (Tas) followed by back to back weekend RunnerUp Best in Shows All Breeds x2 in Jan 2011 under Caroline Stuart (NSW) & J Ashton (SA) (Group judge for B.I.G. Mrs D Johnston - NSW)! Well renowned GR Specialist and AB Judge Beryl Hession gave him a Best in Group and he won his 4th AB BIS under Ms D Duffin (Vic) in Dec 2012; followed by numerous more Best in Groups then his 5th BEST IN SHOW ALL BREEDS on Sat 16th March at Brighton show under Qld judge Mrs S Tringham.

Mason is my Kaparla star. He has so far won every Baby in Group (5) entered & along the way collected 3 All Breeds Best B