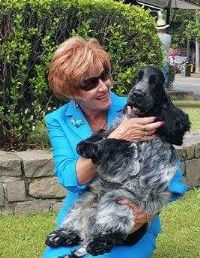 As a successful breeder & exhibitor of Cocker Spaniels under the Glenayden prefix for just over forty years we enjoyed major success with forty three champions, three Grand Champions and one Supreme. Our Glenayden Cockers have taken Best In Show awards at top level including some of our most prestigious shows here in Australia such as Melbourne, Canberra & Sydney Royals, All Breeds Shows, Gundog shows, numerous Specialties including five Best in Show Awards at our Nationals. I have also imported nine English cockers to improve my gene pool and maintain the highest standard possible in my view for this breed.

Having successfully passed my Gundog Group exams and under the Victorian Judges Training Scheme in 2007, I have been invited to judge Cocker Specialty championship shows in Victoria, ACT, Queensland along with Gundog Specialty shows in various states of Australia & New Zealand.

Cockers being my 'heart' breed I am thrilled to be invited to judge bitches at The East of England Championship show held in October 2015 alongside Penny Lester of Quettadene fame who judged dogs, together we adjudicated on the worthy winner from a quality entry for Best In Show - a sensational appointment to have the honour to judge - one that I will treasure forever.

I accept all of my judging appointments with a deep commitment to do the job of judging with honesty, full knowledge and respect to each exhibit and exhibitor. As a successful exhibitor I understand the need to have our dogs judged fairly and as close to the standard as possible with 'TYPE, BALANCE & SOUNDNESS playing a very important part of the placements of the exhibits in my ring.

A few of my highlighted judging appointments include: The Cascade Cocker Spaniel Specialty in the US, The Cocker Spaniel Specialty Open show in Sweden, The West of England Cocker Club along with Contest of Cockers Specialty events in both NSW and Queensland, Gundog Specialties in NSW, ACT, Western Australia, Northern Territory & New Zealand along with many Gundog Groups at All Breed shows.

I have also enjoyed judging the following Breed Specialities as listed below at Open and Championship levels:

I am grateful to the exhibitors who have supported me well with great entries of quality dogs at my appointed shows, I am also mindful that I do not accept appointments within a close time frame of each other in the same states. I prefer a good 18 month gap, I believe this is healthy for exhibitors and entries for the show organisers something I think is very important for all concerned.

I enjoy judging and appreciate the differences of our Gundogs, they are fun dogs and a double joy to judge, another enjoyable faze of our chosen hobby in our wonderful world of show dogs!